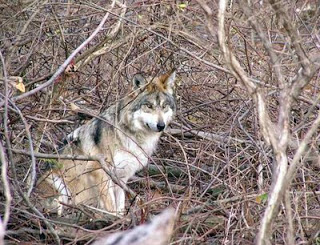 The Wolf Conservation Center is pleased to announce that F836, a five-year-old female Mexican Gray Wolf who lived at the Center for several years, is being released into the wilds of eastern Arizona this month. Right now she is in an acclimation holding pen with a male Mexican Gray Wolf; they will soon make their way to freedom.

We are thrilled to see a Mexican Gray Wolf, especially one we’ve helped take care of, released into the wild, and hope that F836 is successful in establishing a pack and flourishing in the national forests near the Arizona/New Mexico border. Life for the released Mexican Gray Wolves can be especially tough; several have been illegally killed. There are currently only about 50 Mexican Gray Wolves in the wild, and about 400 total in the world. So we hope you will join us in sending good thoughts F836’s way!

F836 lived at the Center for a time because we take part in Species Survival Plans for endangered Mexican and Red wolves, essentially acting as a holding facility for them. Since they may one day be released into the wild, these wolves are not seen by visitors and have only very limited contact with staff. Even though visitors to the WCC do not get to view the SSP wolves, they do often get to hear them howling as they add their voices to those of our four ambassador wolves.