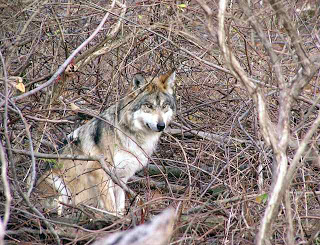 When we started this blog not too long ago, we anticipated having a lot of fun with it. There’s a lot of interesting and, we hope, entertaining things that go on at the Wolf Conservation Center that only a few of us get to see, whether it’s an enrichment session or a spat between wolves that ends with one of them perched on a platform to better keep an eye on her unruly sibling. We hoped that the blog would help people enjoy these incidents and perhaps feel a little bit more involved with the wolves, especially the SSP wolves, which few people get to see. We also hoped that we could share relevant new items and that people could help us celebrate significant milestones, like the occasional release of one of our wolves into the wild. What we failed to anticipate was using this forum to report tragic news such as the murder of one of those wolves.

We were horrified to learn that F836 , a Mexican Gray Wolf who lived at the WCC for several years, was found shot to death in Arizona earlier this month. She was found by the side of the highway where someone apparently dumped her body. F836, whose sister F838 was also fatally shot after being reintroduced into the wild, was five years old. She lived in the wild for barely two months. A U.S. Fish and Wildlife Service release about her death and the investigation into it can be found here.

I never saw F836 in person as far as I can recall. However, I do have an indelible “memory” of her. After F836’s release, I handled Atka, our traveling ambassador wolf, at several programs for schools that Maggie Howell, the WCC director, taught. When she spoke about the reintroduction of wolves, Maggie told the children about F836 being released into the wild and asked them to imagine what it must be like for her to finally be free to roam around and explore the wild. You could see the idea capture her listeners’ imaginations. It was a pretty cool way of conveying the concept of reintroduction. Effective too – every time I heard Maggie do that I couldn’t help but picture F836 in the wild, even though I’m sure what I was picturing didn’t look much like reality. Right now, unfortunately, I can only picture the solitary shoulder of a highway. Hopefully that mental image I used to have of her roaming free will return. She had two months in the wild. Sixty days. That’s too short by any measure.

Despite this tragic setback, the WCC remains dedicated to its mission of preserving wolves in the wild, and committed to the ongoing success of the Endangered Species Act. In the near future we will try to provide suggestions for interested people to help prevent something like this from happening again, so please keep checking in to this blog and our website.