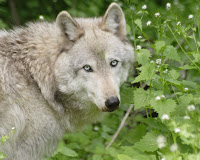 This is a surprise. The western Great Lakes wolf population numbers are good and the state plans were decent enough. Hopefully the lawsuit challenging the decision to remove Endangered Species Act protections from northern Rocky Mountain wolves will share a similar conclusion.

Traverse City, Mich. — More than 4,000 gray wolves in the upper Great Lakes region are going back on the federal endangered species list — at least temporarily.

A coalition of activist groups said Monday it reached an agreement with the U.S. Fish and Wildlife Service to restore federal protections for wolves in Michigan, Minnesota and Wisconsin.

The wolves had been dropped from the endangered list in May.

Several environmental and animal-protection groups sued in federal court this month to reverse the decision.

The settlement says the government erred by publishing the final rule to drop wolves from the list without providing for public notice and comment.

If the agency tries again to remove the wolves, the settlement calls for a comment period of at least 60 days.

(Copyright 2009 by The Associated Press. All Rights Reserved.)