US Senate and House introduce “Protect America’s Wildlife” (PAW) – a bill that can put an end to aerial hunting! 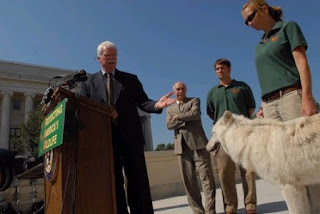 On Sept of 2007 the Wolf Conservation Center made a trip with Atka to our nation’s capitol. Defenders of Wildlife invited the WCC to join Representative George Miller (CA) as he introduced PAW — “Protect America’s Wildlife” — a bill designed to put an end to Alaska’s aerial wolf control program. On July 29, 2009, Miller reintroduced the bill and for the first time ever, PAW was also introduced in the U.S. Senate by Senator Dianne Feinstein (CA)and Senator Ben Cardin (MD)!

Aerial Hunting is against the law. In 1972 Congress passed the Airborne Hunting Act (AHA) to prohibit hunting or harassing animals from aircraft. Although illegal, the practice of aerial hunting has been resurrected by the Alaska Legislature under the guise of wildlife management and predator control. Alaska skirts the intent of Congress by exploiting a loophole in the AHA to use aerial hunting to artificially boost game species populations for hunters. Under Alaska’s aerial hunting program over 1000 wolves have been killed in the past several years.

If passed, PAW will close the loophole in the AHA and prevent other states may propose to follow Alaska’s example. Speak up for wolves! If you agree that it is time to ground Alaska’s illegal and inhumane air assault on wolves, contact your congress person today. PAW now has 110 cosponsors in the House of Representatives so this bill is off to a great start! For Sample message points, click “here”

• Over 35 years ago, Congress banned use of aircraft to hunt wolves and other wildlife by passing the Airborne Hunting Act (AHA) with great bipartisan support. But since 2003, over 1000 wolves in Alaska have been shot by private hunters using airplanes.
• The AHA does allow for the limited use of aerial gunning as a wildlife management tool. But the state’s aerial gunning program is unnecessary, unscientific and is spiraling out of control.
• The program lacks a scientific foundation and aims to virtually eliminate or drastically reduce wolf populations in nearly 60,000 square miles of Alaska.
• Alaska’s aerial gunning program also targets brown and black bears, including sows and cubs, by promoting use of aircraft for “land and shoot” hunting of bears in over 12,000 square miles of the state.
• Fortunately, Rep. George Miller (CA) and Sen. Dianne Feinstein (CA) have introduced the Protect America’s Wildlife (PAW) Act to close the loophole in the Airborne Hunting Act.
• The PAW Act would:
o Clarify when states can use aircraft to kill wolves and other predators to protect wildlife (legitimate biological emergency of prey species, for example)
o Allow states to use aerial control to protect land, water, wildlife, livestock, domesticated animals, human life and crops
o Stop states from using aerial gunning to artificially boost game species populations
o Require states to provide a scientific foundation to use aircraft for wildlife management
• Alaska’s program is not legitimate wildlife management. The state’s aerial “predator control” is occurring in areas already suffering from an overabundance of prey. In March 2009, for example, the state removed 84 wolves from the Upper Yukon/Tanana area, an area they are now actively trying to reduce prey populations in, by allowing hunters to kill female moose. A surplus of prey species can result in overgrazing, starvation and the spread of disease among excessive prey.
• Wolves help maintain ecosystem health by keeping moose and caribou populations both in check and healthy by often preying upon old, sick and injured animals. Removing keystone predators such as wolves can cause long-term damage to fragile forest and tundra ecosystems.
• Shooting wildlife from aircraft or chasing wildlife with aircraft to exhaustion, then landing and shooting them at close range, is a clear violation of the rules of ethical hunting. Most hunters are opposed to the use of aircraft to hunt because, among other reasons, it is not considered “fair-chase hunting” and is unsportsmanlike.
• Other states are threatening to follow Alaska’s lead, making aerial gunning a national issue once again.
• SENATE ASK: Senators NAME and NAME should cosponsor the Protect America’s Wildlife Act (S. 1535)
• HOUSE ASK: Representative NAME should cosponsor the Protect America’s Wildlife Act (H.R. 3381)
• It is time to stop this unnecessary and unscientific practice once and for all, to protect wolves, other predators, and ecosystems in Alaska and the lower 48 states.