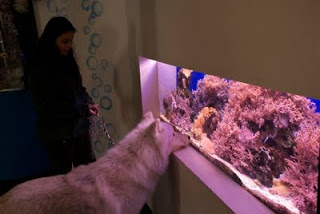 November means that it’s time for Atka to once again visit the Maritime Aquarium in Norwalk, CT. We were happy to be asked back to give school groups and other visitors the chance to learn about wolves as part of the Aquarium’s efforts to educate people about endangered species. 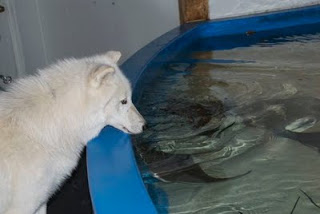 enjoyed exploring his surroundings before the Aquarium officially opened. He was so impressed, especially by the Stingray Touch Pool, that he felt compelled to officially claim the Aquarium as his territory in his own unique way.

After we cleaned that up, it was time to talk to the visitors. We were happy to meet a lot of people who had never seen a wolf before, and also to see some students who recognized Atka from his visit to their school. Atka amused himself by knocking over his water bowl – he’s very particular about what level it should be filled to – and snacking on a banana. He even put on a fine display of scent rolling after destroying an empty coffee cup. 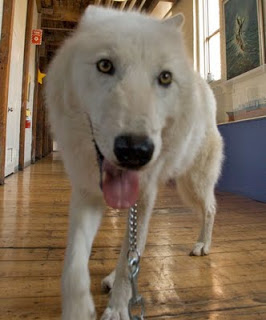 Perhaps the most impressive thing is that as soon as our session was supposed to end, Atka headed for the door despite not receiving any cue from us. He seems to know what time to leave because all our programs at the Aquarium end at the same time. Quite remarkable!

Atka will be returning to the Maritime Aquarium in the near future for a special program. You can access his schedule of appearances here. Thanks again to the helpful Aquarium folk and to everybody we saw today!