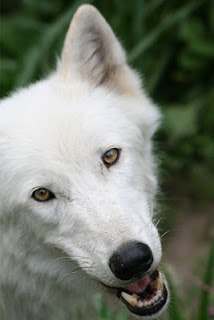 “We reached the old wolf in time to watch a fierce green fire dying in her eyes. I realized then, and have known ever since, that there was something new to me in those eyes – something known only to her and to the mountain.”
~ Aldo Leopold, A Sand County Almanac

I couldn’t help but recall this essay when the fire within the eyes of our benevolent leader slowly faded this afternoon. Apache the ambassador wolf died today from cancer. It’s difficult to find words, perhaps that is why I am borrowing some of Aldo Leopold’s most powerful ones from “Thinking Like a Mountain.” It is unlikely that Leopold could have imagined the far-reaching impact his words would have. Apache’s influence was great as well, he touched all who were lucky enough to hear his howl.