Day one in Yellowstone! 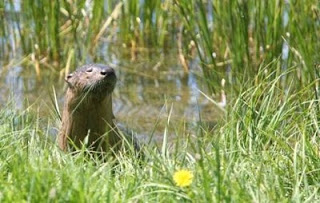 The Wolf Conservation Center’s Yellowstone Adventure is off to an incredible start! The WCC’s education crew met up with fellow adventurers and WCC supporters on Monday afternoon and within less than 24 hours we encountered dozens of diverse species. Although the official count has yet to be determined, all of us agree that the number isn’t why our first full day in the park far exceeded our expectations. The awesome interactions among the different species are what made our day so special. I won’t recount them all, but two exciting highlights presented nail-biting predator-prey inetractions.
Early in the morning we watched the industrious four-year-old “Gray female 06” of the Lamar Canyon Pack attempt making a kill all on her own. We were captivated by the intense chase for quite some time. This beautiful wolf, with looks similar to that of WCC’s ambassador wolf Lukas, pursued a bull elk in and out of powerful rivers until she finally conceded – no doubt to the relief of her prey. Once Gray female 06 retreated to the lush sage brush on higher ground, she was welcomed by her four hungry and playful pups! We wondered where the two males that comprise the rest of her pack could have been, perhaps they were the culprits causing several coyotes to yip and howl on the opposite hill.
Our adventure continued with another exciting chase after a moderate hike to Trout Lake a little further east into the park. The view at the crystal clear lake among snow capped mountains was astounding and the action was too! Two energetic otters wowed us with their speed and agility as they successfully hunted large swift trout while seeming to have fun all the while. What a wonderful morning. Hats off to Nathan Varley and Linda Thurston of Yellowstone Wolf Tracker for leading us through this wonderful park! I can’t wait until tomorrow 🙂