The Red Wolf Pups get a visit from the Doc!

It should have been simple. After all, there was literally a ton of Wolf Conservation Center volunteers and staff on hand – 15 of us weighing a bit more than 2000 pounds total – matched against 80 pounds of red wolf pups (M1803 and M1804) due for a regularly scheduled medical check up. We had already ventured into one of our spacious remote enclosures and easily captured two adult red wolves F1397 and M1483, gently herding them through the undergrowth and into “capture boxes” within minutes, checking their vitals (weight, respiration, etc.), administering vaccinations, and releasing them without incident. Even the feisty parents of the pups, F1397 and M1483, had quickly been corralled and successfully checked with a minimum of fuss. 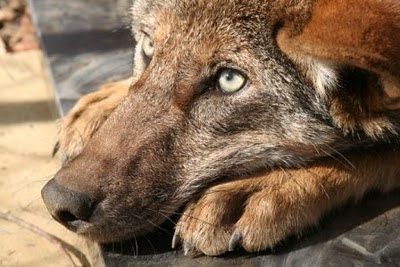 All that was left were the two pups, outnumbered 15-2, not even 6 months old and matched up against a small army of experienced wildlife workers with collective decades of experience, numerous college and graduate degrees, and a variety of tools. As expected, it wasn’t even close: the pups evaded and outwitted the capture team with aplomb, taking refuge in a den that’s probably bigger than the average New York City apartment, thanks to the ceaseless efforts of their parents throughout the year.

After debating various strategies that Wiley E. Coyote would have approved of, the team finally took the only feasible option left and proceeded to dig up the den. One of the pups made a dash for freedom and was safely tracked down in a far end of the enclosure, while the other stubbornly stuck to his “living room” until he was escorted to fresh air but a couple of brave, and quite dirty at this point, members of the capture team. 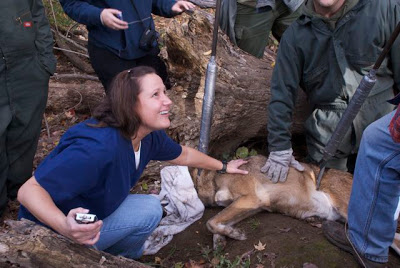 It only took 50 minutes to get our hands on the pups, who turned out to be amazingly cute and healthy. Volunteer veterinarian Paul Maus administered the proper vaccinations, took some blood samples, and the pups were happily reunited with their parents once more in a part of the enclosure that turned out to have a wild pumpkin patch growing in it! We were also happy to be joined by Laura Kowalski, a WCC supporter who had won the chance to attend a capture, and ended up spending three hours in the company of critically endangered red wolves, which hopefully made up for her having to listen to our incessant banter.