The Season of Romance

Winter is officially here and it’s an exciting time for wolves and the WCC. January marks the beginning of the 2011 breeding season! Wolves are “mono-estrus” — breeding only once a year during the winter months. The Species Survival Plan (SSP) management groups for both the Mexican gray wolf and the red wolf determine which wolves should be bred each year by using software developed for the population management of endangered species. This year the WCC is pleased to host three breeding pairs! With so much potential love in the air it can get quite confusing! Here’s an introduction to the WCC’s three breeding pairs: 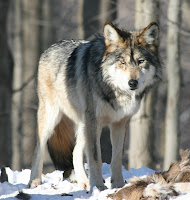 All six of these wolves are genetically valuable individuals that have been given the opportunity to breed because their offspring will increase the genetic diversity of their rare species and enhance that species’ chance to survive and thrive in the wild. So an exciting chapter begins in the lives of these very special wolves and the WCC! Happy winter!