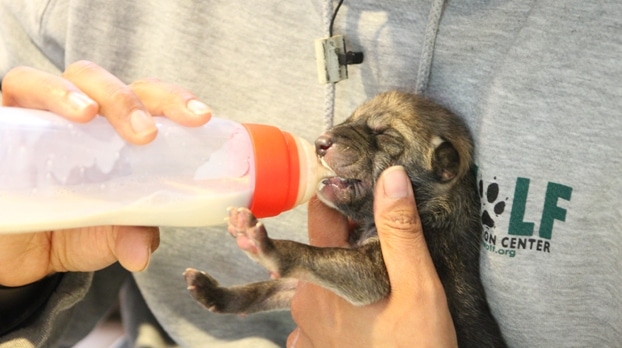 Sometime on Wednesday afternoon, Mexican gray wolf F749 crawled into her homemade den and quietly gave birth to two male pups while her mate, M804,  patiently waited right outside. Unfortunately, this birthday is bittersweet. Due to the mother’s poor record of keeping her vulnerable and valuable pups alive (F749 has lost several litters in her 11 years, only 2 of her last 19 pups survived), the 2 one-day-old pups were pulled from their parents less than 24 hours after their birth to be hand reared at Mesker Park Zoo & Botanic Garden and eventually placed with Mexican wolf foster parents there. 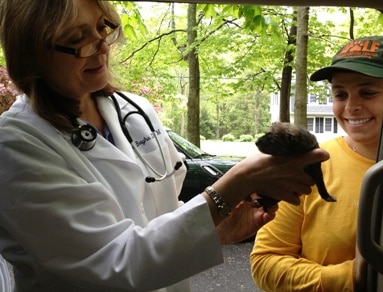 After collecting her pups, WCC staff brought the brothers to Pound Ridge Veterinary Hospital where WCC volunteer Veterinarian Renee Bayha gave them a bill of good health.  We then continued to Sikorsky Memorial Airport to meet up with a special volunteer, one with wings.  Jim Houser is among the great folks from Lighhawk, a volunteer-based environmental aviation organization that donates flights to conservation groups. Houser donated his time, plane, and fuel to help make this special mission a success.  WCC curator Rebecca Bose kept the boys warm and bottle fed throughout the four hour flight and upon arriving in Indiana, the boys were given to their new temporary caregiver, Dr. Susan Lyndaker Lindsey, Animal Curator at Mesker Park Zoo.

As of today, the pups are reportedly continuing to do well. As for F749 and M804, they’ve been seen out via webcam and welcomed a large meal, but we can imagine they’re extremely confused at this time and hope that they realize on some level that they are a part of something much larger than their pack, the recovery of their imperiled species.