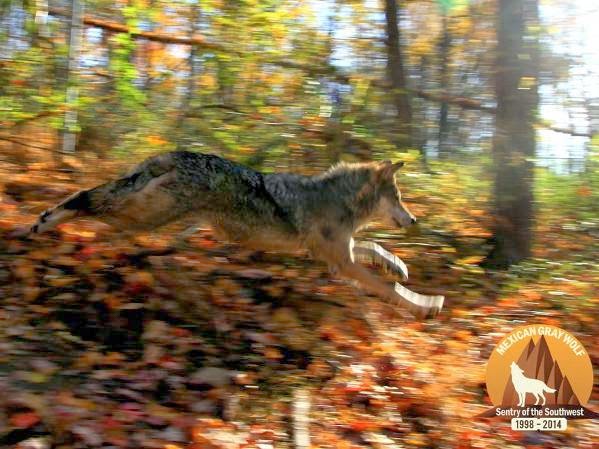 In the late 1800s, there was a national movement to  eradicate wolves and other large predators from the wild landscape in the United States. Wolves were trapped, shot, and poisoned.  Bounties were paid. By the mid-1900s, wild Mexican wolves had been effectively exterminated in North America.
With the only lobos remaining in captivity, the Mexican wolf was listed by the U. S. Fish and Wildlife Service (USFWS) as an endangered species in 1976.  The Endangered Species Act requires the USFWS to develop and implement recovery plans for listed species with the objective to restore species to secure population levels, maintain those levels, and then remove them from the endangered list.  Shortly after listing Mexican wolves as endangered, USFWS collaborated with Mexico to capture all Mexican wolves remaining in the wild.  Five wild Mexican wolves (four males and one pregnant female) were captured alive in Mexico from 1977 to 1980, and these wolves were transferred to the United States to establish a certified captive breeding program.
Recovery Efforts in Captivity
The captive population is currently hosted by a network of organizations in both the United States and Mexico participating in the Mexican Wolf Species Survival Plan (MWSSP).  A Species Survival Plan is a breeding and management program designed to ensure the long-term sustainability of captive-based animal populations. The primary goal for the MWSSP is to breed wolves for maximum genetic integrity for reintroduction into both the United States and Mexico.  Organizations participating in the MWSSP are tasked with housing and caring for the wolves, collaborating in the captive breeding program, sharing observations and recommendations for release, and engaging in the sometimes unusual and often controversial measures to save the species.  Recovering the Mexican wolf is a coordinated effort  with zoos, wildlife conservation centers, USFWS, Mexico’s Fish & Wildlife Agencies and managed under the Association of Zoos and Aquariums (AZA).
Presently, there are approximately 400 Mexican gray wolves remaining in the world, the majority living in captivity among 50+ MWSSP facilities.  Every one of these captive endangered wolves is a part of something bigger than their pack or the facilities that house them, they are integral parts of the recovery of their rare species. Many of these wolves contribute as “Ambassadors,” living on view at a variety of zoos throughout the United States and Mexico to help educate people about the importance of their wild counterparts. Some of these animals also contribute to the revitalization of their species as participants of the MWSSP captive breeding program.  Gamete cryopreservation efforts allow even deceased wolves to contribute to Mexican wolf recovery via artificial insemination. The most fortunate fraction of captive wolves, however, contribute as candidates for release into the wild.
Please enjoy this video about the Wolf Conservation Center’s captive efforts to help a critically endangered species recover.

The Mexican Wolf from Lincoln Athas on Vimeo.

An account of the Mexican Wolf, or lobo, at Wolf Conservation Center in South Salem, NY.