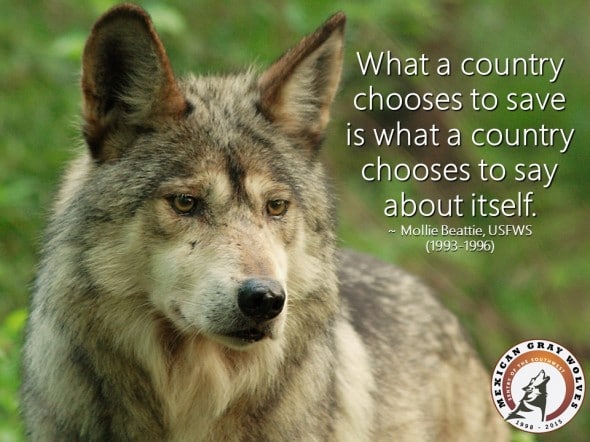 On March 29, 1998, 11 captive-reared Mexican gray wolves (Canis lupus baileyi) were released to the wild for the first time in the Blue Range Recovery Area of Arizona and New Mexico. Missing from the landscape for more than 30 years, the howl of the rarest and most unique subspecies of gray wolf was once again greeted by the mountains of the southwest. This week marks the 17th anniversary of this historic event, a significant milestone for the lobo and wildlife conservation! On this first day of #LoboWeek, we’re revisiting an important study that reflects what is needed to keep the subspecies going. Happy #Loboweek!

Mexican gray wolves are one of the rarest and most critically-endangered animals in the U.S. This subspecies of wolves – known in the Southwest as lobos –descended from the first wave of wolves to cross the Bering Straits from Asia to Alaska many thousands of years ago. Mexican gray wolves have a long history of wandering across the landscape. Over time, they made their way south into the southwestern U.S. and central Mexico where they adapted to life in the forested “sky island” ranges in a sea of grassland and desert, and from where they draw their common name. In spite of their uniqueness, adaptability, and long history, very few lobos remain today. Deliberate persecution drove Mexican gray wolves to the brink of extinction; in the late 1970s and early 80’s the last handful of wild Mexican gray wolves was captured to begin a captive breeding program.

Of these five surviving lobos, only three were unrelated. Along with four pure Mexican gray wolves already in captivity, these 7 “founders” were all that stood between survival and complete extinction of the Mexican gray wolf. After many years of work to restore the lobo in the southwest U.S., there are currently about (109) wolves in one wild population in Arizona and New Mexico, and another 300 living in captivity.

But continued recovery of these unique wolves is far from certain. Small populations of animals face genetic problems from inbreeding that can undermine their recovery. This problem is particularly pronounced in Mexican gray wolves because there were so few survivors when recovery efforts began. For Mexican gray wolves to have a chance at survival in the wild, there must be “genetic exchange” or migration of wolves between populations and reproduction across those populations. But how many populations, and how much migration and reproduction are needed to make sure Mexican wolves can sustain themselves in the future?  All too often, wildlife managers guess at the answer.

Thanks to Drs. Carlos Carroll, Richard Fredrickson, and Robert Lacy, however, we don’t have to guess any longer. These well-respected scientists (and members of the lobo Recovery Team) designed a complex model that brought together information on Mexican gray wolf genetics, habitat and demography to measure just how much flow between populations is needed to keep the subspecies going. Their results demonstrated that the fewer wolves moving between populations, the more likely it is that Mexican gray wolves will go extinct. To stave off extinction, about one wolf from each generation must access another population. And, for the model to work, there must be at least three populations with this movement happening between them. The good news is that this is possible, provided that the U.S. Fish and Wildlife Service establishes two additional populations and lets lobos move from population to population.

Still, movement across the landscape, by itself, is not enough to solve the crisis. The migrating wolves also have to find a mate and have pups. This is a special challenge for wolves because of their unique pack structure – in a typical wolf pack only the pack leaders, or “alphas,” reproduce. In order to be counted as an “effective migrant” in this model (and thus lessen extinction odds), wolves had to both migrate and become a reproducing pack leader. When this requirement is added to the fact that there is currently only one small population (which is suffering from a lack of genetic diversity), and only a few areas with sufficient wolf habitat, the conservation challenges for Mexican gray wolves become formidable.

But knowing what these challenges are allows us to help the wolves overcome them. This latest study by Dr. Carroll and colleagues enables us to move beyond generalities and to get really specific when it comes to wolf conservation. We now know precisely what Mexican gray wolves need to recover. With this information, there is no room for excuses. For these wolves to succeed, the U.S. Fish and Wildlife Service needs follow what science tells us – begin building two additional populations, release more wolves, and implement a viable recovery plan (explaining why the Recovery Team hasn’t met since 2011 would be nice, too). The clock is ticking on the lobos’ chances for survival. No species should have to face extinction at the hands of humanity, much less twice.