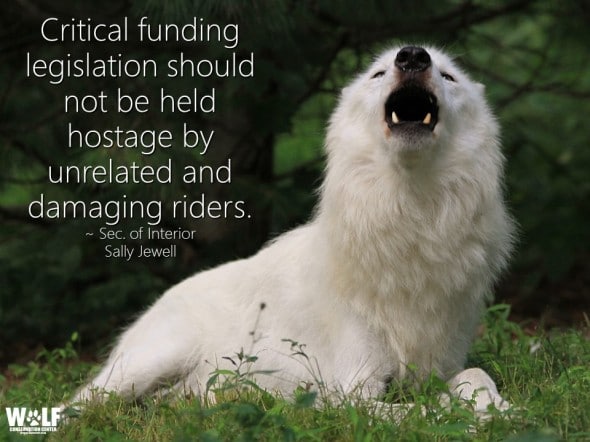 On June 9th, the 2016 Interior and Environment Appropriations bill (a bill to fund Interior Department) was introduced in the U.S. House of Representatives. Buried in the bill is language directing the Secretary of the Interior to end federal Endangered Species Act protections for gray wolves in Minnesota, Wisconsin, Michigan, and Wyoming and thus allow trophy hunting of wolves to resume within those regions. To add insult to injury, the bill includes “no judicial review” clauses thus prohibiting any legal challenge.

Although Representatives Nita Lowey (NY), Betty McCollum (MN), Chellie Pingree (ME), and Barbara Lee (CA) vehemently opposed the anti-ESA and wolf delisting riders, they were outvoted and the riders remain.

Now the Senate 2016 Interior and Environment Appropriations bill includes a wolf delisting rider and other anti-environment riders too. The full Senate Appropriations Committee markup meeting is scheduled for Thursday so it’s critical that we contact our Senators TODAY to urge them to oppose anti-wolf legislation in this Congress!

Policy decisions about wolves and other wildlife should be based on the best SCIENCE, not politics.

Responsible for passing appropriation bills, both the United States House and Senate Committees on Appropriations are charged with regulating expenditures of money by the U.S. government. As such, these committees are among the most powerful of the committees, and its members are seen as some of the most critically influential in our nation.

In this video from the WCC’s Wolf Reception at Winston on May 17th, featured guest Rep. Nita Lowey explains the significance of her role on the House Appropriations Committee as it relates to riders and wolves specifically.

Watch the unedited version of the video here.