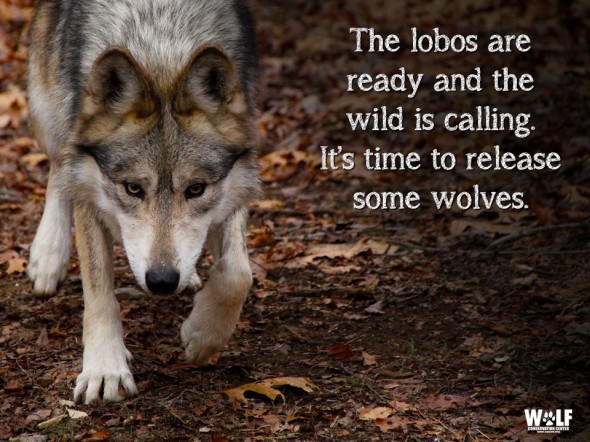 SILVER CITY, N.M.— Advocates for wild animals, along with scientists and breeders of endangered wolves for conservation, urged Secretary of the Interior Sally Jewell today to release five or more packs of endangered Mexican gray wolves into the Gila National Forest in New Mexico through the end of this year and into 2016. A letter to Jewell signed by 43 groups and scientists emphasizes the urgency of the issue, pointing out that federal biologists and independent scientists have repeatedly made clear that without such releases, wolf inbreeding will worsen — crippling chances of recovery.

“Federal biologists know they must release more Mexican wolves from captivity, but the Obama administration has permitted the release of just four,” said Michael Robinson of the Center for Biological Diversity. “Then the government recaptured one and shot another, and the remaining two also died — which argues not only for stricter protections but also for many more releases to ensure that some wolves actually add to the gene pool.”

Releases of wolves bred in captivity are necessary, according to the U.S. Fish and Wildlife Service and independent scientists, in order to diversify the gene pool among the wild wolves. Inbreeding among the Mexican wolf’s wild population in the United States is causing fewer pups to be born and fewer to survive to adulthood.

“The longer we delay in introducing new wolves to increase genetic variation in the wild Mexican gray wolf populations, the greater our future challenge will be to ensure that this distinctive wolf survives,” said Joseph Cook of the American Society of Mammalogists. “Small populations with limited genetic variability often suffer from the consequences of inbreeding depression, Small populations with limited genetic variability also are generally less resilient to changing environmental conditions and less resistant to the introduction of novel pathogens.”

According to the latest census number, 110 wolves, including just eight breeding pairs, live in the combined Gila National Forest in New Mexico and Apache National Forest and Fort Apache Indian Reservation in Arizona. Fewer than 15 wolves live in the wild in Mexico.

“When you have only a handful of founders and limited genetics to recover a species, you cannot afford to take your time with recovery efforts,” said Maggie Howell of the Wolf Conservation Center, which houses and breeds Mexican wolves for reintroduction. “The wolves are ready and the wild is calling. It’s time to release some lobos.”

“Mexican wolves are part of the natural heritage of all Americans,” said Mary Katherine Ray of the Sierra Club’s Rio Grande chapter. “The Endangered Species Act, which requires the protection and recovery of imperiled animals, continues to be a very popular national law. Though a vocal minority at the state level is attempting to obstruct the return of wolves to the Southwest, the Fish and Wildlife Service should proceed to release more wolves to safeguard their still fragile population.”

“As the principal agency responsible for ensuring lobo recovery, U.S. the Fish and Wildlife Service cannot sit idly by while one state’s anti-carnivore rhetoric and political scheming attempts to obstruct reintroduction efforts,” said Kelly Nokes, carnivore campaign lead for WildEarth Guardians. “It is past time that Service takes control and carries out its duty to recover lobos in New Mexico, as the Endangered Species Act demands.”

BackgroundThe U.S. Fish and Wildlife Service began reintroducing Mexican wolves in 1998 but only permitted itself to release wolves from captive breeding facilities into a small portion of the Apache National Forest, whose most productive habitats were quickly occupied by wolf families, leaving little room for additional releases.

This past January the Fish and Wildlife Service expanded the area where captive-bred wolves could be released to include the 3.3-million-acre Gila National Forest. The Gila is the fourth-largest national forest in the country and encompasses the world’s first official wilderness area, designated in 1924, that was protected from construction of roads. The Gila also supports thousands of deer, elk and other animals on which wolves prey, thereby overall strengthening such animals’ herds and preventing overgrazing. Yet more than half of this national forest has no wolves.

The Center for Biological Diversity is a national, nonprofit conservation organization with more than 900,000 members and online activists dedicated to the protection of endangered species and wild places.

WildEarth Guardians is a non-profit organization dedicated to protecting and restoring the wildlife, wild places, wild rivers, and the health of the American West.