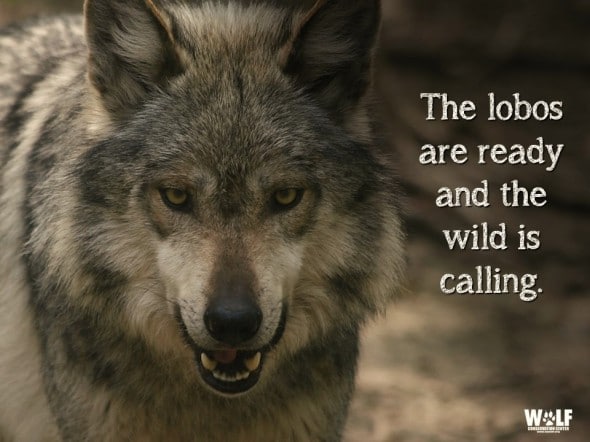 As representatives of facilities that breed endangered Mexican gray wolves in captivity in order to help re-establish this unique subspecies of the gray wolf in the wild, we urge the New Mexico Game Commission to allow the Ladder Ranch in Sierra County to resume holding wolves in pens that are remote from human contact.

The Ladder Ranch is one of only three Mexican gray wolf pre-release facilities in the U.S. Adjoining the eastern boundary of the Aldo Leopold Wilderness within the Gila National Forest, Ladder Ranch is uniquely situated to assist federal authorities in the recovery of Mexican wolves.

Through the generosity of owner Ted Turner, ever since reintroduction began in 1998 the Ladder Ranch’s secure pens and dedicated personnel have saved taxpayers money by holding wolves immediately after their removal from the wild and before releases into the wild.

The New Mexico Game Department’s May 7 denial of the Ladder Ranch’s permit to continue holding wolves – which the game commission is expected to uphold or overturn today in Roswell – comes just when the U.S. Fish and Wildlife Service is finally, after 15 years of reviews and public meetings, poised to release captive-bred wolves into the Gila.

We do not speak for Ladder Ranch, but as partners in the American Association of Zoos and Aquarium’s Mexican Wolf Species Survival Plan we have long worked to breed Mexican wolves. Captive breeding kept the Mexican wolf from going extinct after the last five wolves were caught alive in Mexico between 1977 and 1980.

Three of these were successfully bred, and in 1995 their descendants were bred with those of four other Mexican wolves captured previously and until then maintained separately. By that time, there were no Mexican wolves known in the wild.

Recovery of the Mexican wolf must occur in the wild, and that is consistent with the Endangered Species Act’s first statement of purpose to conserve the ecosystems on which endangered species depend.

Wolves help maintain the health of their ecosystem through honing the fitness of the animals they seek as prey, ensuring the most alert and best runners pass on their genes; through keeping elk moving rather than sedentary and browsing on saplings along streams; through providing carrion for scavenging animals such as eagles and bears; and through controlling the number of coyotes, which the wolves regard as competitors, and thus helping keep smaller species of animals from over-predation by coyotes.

Mexican wolves in the wild face not only illegal shootings but also inbreeding from too few animals with few choices of mates. Inbreeding results in smaller litter sizes and fewer pups surviving to adulthood — one reason only eight breeding pairs of wolves survive in the wild in Arizona and New Mexico.

The solution is a resumption of releases that dwindled to just four captive-bred animals let go during the entirety of the Obama administration thus far. The Ladder Ranch’s facilities and personnel that have held over 90 wolves since reintroduction began, and its proximity to the recovery area, make it a trusted partner for federal biologists in both releasing and removing wolves.

Notwithstanding that in 2011 the New Mexico Game Commission withdrew from the cooperative interagency wolf management team, ceding the state’s place at the decision-making table, the commission should now affirm the value of cooperation and philanthropy in endangered species recovery.

Approving Ladder Ranch’s permit to hold wolves would demonstrate that these appointees of Gov. Susana Martinez recognize the broad public support for Mexican wolf recovery in New Mexico, nationwide and internationally, and do not want to get in the way of federal officials accepting the help that the Ladder Ranch continues to offer.