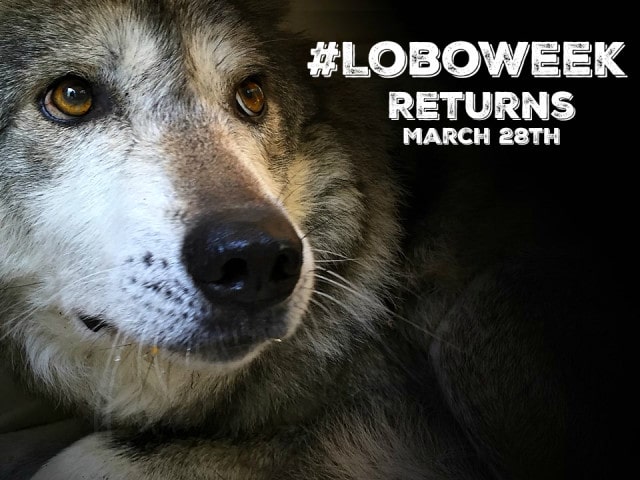 The Mexican gray wolf (Canis lupus baileyi) or “lobo” is the most genetically distinct lineage of gray wolves in the Western Hemisphere, and one of the most endangered mammals in North America. By the mid-1980s, hunting, trapping, and poisoning caused the extinction of lobos in the wild, with only a handful remaining in captivity. In 1998, a new chapter in the Mexican wolf’s history began, with a homecoming that changed the landscape.

On March 29, 1998, 11 captive-reared Mexican gray wolves were released to the wild for the first time in Arizona and New Mexico. Missing from the landscape for more than 30 years, the howl of the Mexican wolf was once again greeted by the mountains of the southwest. This week marks the 18th anniversary of this historic event, a significant milestone for the lobo and wildlife conservation!

In recognition of the anniversary, the Wolf Conservation Center joins #LoboWeek, an international week of action dedicated to educating people about the importance and plight of the Mexican wolf and the efforts to restore this critically endangered predator to its ancestral home in the wild.

“#LoboWeek is a wild holiday offering an opportunity to harness the power of social media to create a robust educational movement about the “Sentry of the Southwest,” explained WCC’s Maggie Howell. “Mexican gray wolves remain critically endangered due to both natural and political challenges. Via the #LoboWeek movement, we aim to discuss our critical efforts to recover Mexican wolves and mobilize support for these essential creatures who cannot speak for themselves. With the WCC’s almost 3 million followers on Facebook alone, our #LoboWeek howls are sure to be heard!”

Please visit the WCC #LoboWeek Page to learn more about joining the movement and to download the FREE #LoboWeek badge and photos.