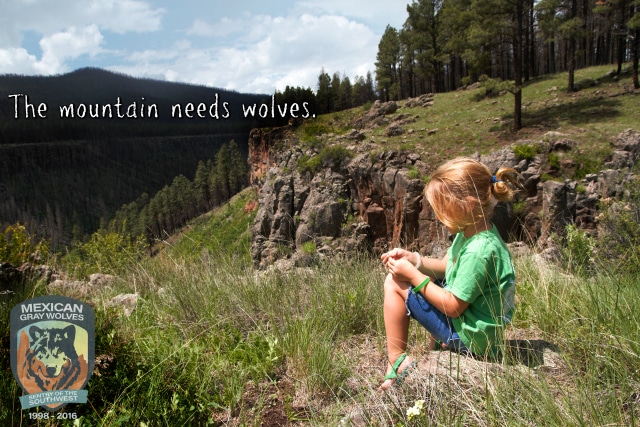 On our final day of the fun and awareness-raising event, I brought my kiddo to the site that inspired some of Aldo Leopold’s most powerful words from his essay “Thinking Like a Mountain.”  As we stood on the very spot where this most influential conservation thinker of the twentieth century “reached the old wolf in time to watch a fierce green fire dying in her eyes,” it was difficult to fend off emotions of sadness, gratitude, and understanding. Is it possible that Leopold had realized the far-reaching impact his words would have?  As we sat where he long ago came to realize the importance of the lobo, I felt as if he had then imagined us walking in his footsteps to behold the inspiration of his revelation.  I explained to my daughter why the view was more than breathtaking, and without many words, she seemed to grasp its significance.

“Without wolves, the mountain is sick,” she explained. “The mountain needs wolves.” She got it.

Wolves are a critical keystone species in a healthy ecosystem. By regulating prey populations, wolves enable many other species of plants and animals to flourish. In this regard, wolves “touch” songbirds, beaver, fish, and butterflies.  Without predators, such as wolves, the system fails to support a natural level of biodiversity.  The mountain gets sick.

This week marks the 18 year anniversary of the first releases of Mexican wolves back into the wild. It’s been almost 20 years and there remains just single wild population comprising only 97 wolves. My hope is that one day my daughter will return to the Apache National Forest with her family to be greeted by the howls that these mountains will forever understand. But this won’t be possible if we let history repeat itself.

The Mexican gray wolf (Canis lupus baileyi) or “lobo” is the most genetically distinct lineage of gray wolves in the Western Hemisphere, and one of the most endangered mammals in North America. By the mid-1980s, hunting, trapping, and poisoning caused the extinction of lobos in the wild, with only a handful remaining in captivity. In 1998 the wolves were reintroduced into the wild as part of a federal reintroduction program under the Endangered Species Act. Today’s single wild population of 97 individuals is a significant decrease from the 110 counted at the end of 2014.

The future of Mexican wolves is on shaky ground. The clock is ticking on the lobos’ chances for survival. No species should have to face extinction at the hands of humanity, much less twice. We need to hear the valid concerns shared by the scientific community and not let economic and political considerations govern lobo recovery.

For the sake of wolves, the environment, and future generations to come, it’s key that we take the necessary management actions urgently required for the long term survival of Mexican gray wolves. Please consider signing the petition HERE.