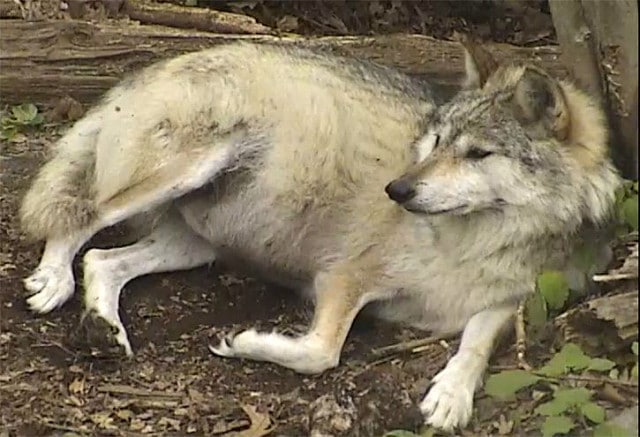 Pregnancy can be an exciting and magical time for parents but waiting can be excruciating for well-wishers! No pups yet for Mexican wolves F1226 and M1133, but F1226 recently plucked the hair from her big belly – a custom for expectant mothers when preparing for pups.

The WCC is one of 54 facilities in the U.S. and Mexico participating in the Mexican Wolf Species Survival Plan (SSP) – a bi-national initiative whose primary purpose is to support the reestablishment of Mexican wolves in the wild through captive breeding, public education, and research. The Mexican wolf SSP management group for the Mexican gray wolf determines which wolves should be bred each year by using software developed for the population management of endangered species. This is necessary because all Mexican wolves descended from just 7 founders rescued from extinction. Genetic diversity is the primary consideration in the selection of Mexican wolf breeding pairs and M1133 and F1226 are a great match on paper with an extremely low inbreeding coefficient.
Sometimes saving a species isn’t very romantic, but it turns out that F1226 and M1133 are a vibrant, loving, and playful pair that make it look like a whole lot of fun! We saw the pair engage in a copulatory tie on March 21st, so given a gestation period of 63 days her due date would be May 23rd. Keep your paws crossed!

Our live webcams will be trained on the pair so consider monitoring the couple from your home, office, or mobile device. If you see something interesting, please let us know!

The Mexican gray wolf (Canis lupus baileyi) or “lobo” is the most genetically distinct lineage of wolves in the Western Hemisphere, and one of the most endangered mammals in North America. By the mid-1980s, hunting, trapping, and poisoning caused the extinction of lobos in the wild, with only a handful remaining in captivity. In 1998 the wolves were reintroduced into the wild as part of a federal reintroduction program under the Endangered Species Act. Today in the U.S., there is a single wild population comprising only 97 individuals – a decrease from 110 counted at the end of 2014.