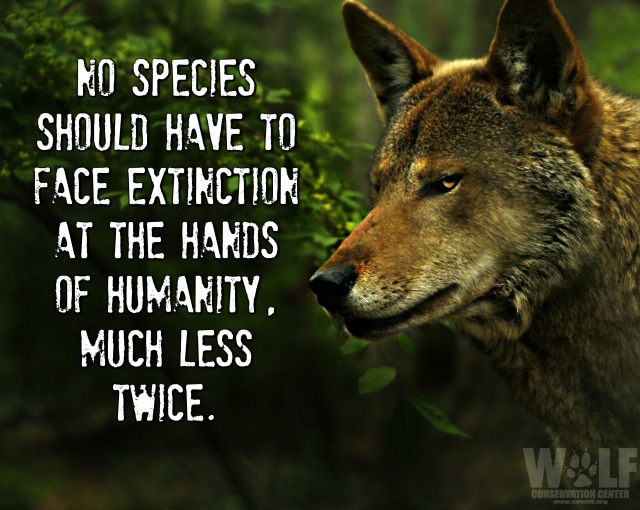 In an effort to push the the critically endangered red wolf to EXTINCTION, the North Carolina State House approved in committee this morning state bill 1144 – a bill requiring USFWS to “declare the red wolf extinct in the wild.”

The bill will go to the floor of the Legislature later today.

If you are a North Carolina constituent, please call your state legislators TODAY and ask them to support red wolf protection in North Carolina and vote against House Bill H1144. Find your NC representatives here.

The value and importance of conserving species and ensuring biodiversity is an accepted axiom of the 21st century. The importance of a keystone predator such as the red wolf to a balanced and resilient ecosystem is undeniable. That our policies should be motivated by these basic scientific principles is a must.

Continued support of the Recovery Program in eastern North Carolina is vital to the long-term prospects of the species. USFWS Director Ashe’s has stated that the agency is committed to use scarce resources for species facing the greatest risk of extinction. Thus, is it not USFWS’s obligation to adhere to the Endangered Species Act by strengthening its efforts to mitigate threats to red wolves in the recovery area (including human intolerance), and supporting the red wolf recovery program in the state?

There is a perceived notion that red wolves are a local or regional issue and that only the residents of North Carolina are impacted by the results of this review. Endangered species recovery, however, is a matter of pride and concern for all U.S. citizens. This is not an isolated issue for North Carolina. If USFWS abandons the program, it would establish a dangerous precedent – effectively allowing a state to refuse recovery efforts for endangered species if they don’t feel like complying.

USFWS is charged by federal law with protecting endangered species.