Supporters to Rally to Save Endangered Red Wolf 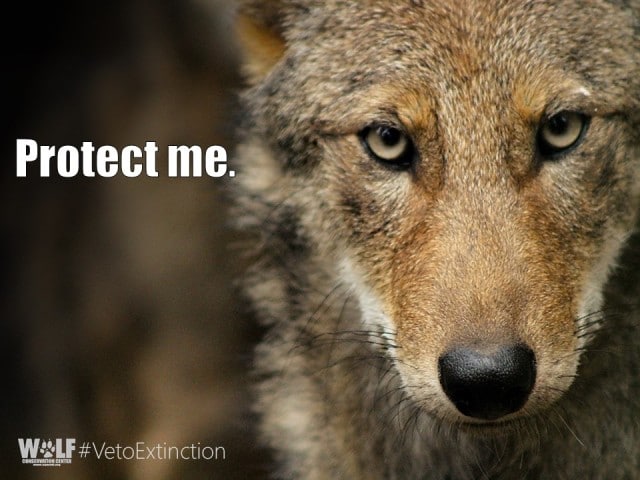 RALEIGH, N.C.— With as few as 45 red wolves remaining in the wild, wildlife supporters and conservation organizations will gather in Raleigh at 12 noon on Wednesday, Aug. 24 in a rally to save this highly endangered North Carolina species. The U.S. Fish and Wildlife Service, the agency tasked with recovering red wolves, is considering abandoning its red wolf recovery program this fall.

Wolf experts will be on hand for a family-friendly, “pre-rally” educational event starting at 10 a.m. Following the noon rally, wolf supporters plan a short march through North Carolina State University and back to Pullen Park.

The Raleigh rally is the second of two planned rallies across the state this week — the first takes place on Tuesday in Washington, N.C. — to call attention to federal wildlife officials’ intent to abandon red wolf recovery. The rallies are sponsored by the Red Wolf Coalition, the Wildlands Network, the Endangered Species Coalition, North Carolina Wildlife Federation, The Wolf Conservation Center and the Center for Biological Diversity.

“Endangered species recovery is a matter of pride and concern for all U.S. citizens,” said Maggie Howell, executive director of the Wolf Conservation Center. “This is not an isolated issue for North Carolina. If USFWS abandons the recovery program, it would establish a dangerous precedent – effectively allowing any state to refuse recovery efforts for endangered species if they don’t feel like complying.”

“It’s simply jaw-dropping that the U.S. Fish and Wildlife Service is consciously deciding whether to issue a death sentence — to knowingly allow a species found only in the United States to go extinct,” said Leda Huta, executive director of the Endangered Species Coalition. “The red wolf has been one of our greatest wildlife success stories, and it could be again.”

“It’s possible that the red wolf is the first species in history that the U.S. Fish and Wildlife Service is simply going to let go extinct in the wild, when we know how to save it,” said Ron Sutherland.
Background

The red wolf is one of the most endangered species in the world, and can only be found in the wild in North Carolina. In 1987 red wolves were reintroduced into eastern North Carolina. From an initial 14 wolves, the population grew to 130 individuals by 2006. By 2012 the red wolf population had shrunk to 90 to 100 individuals, in part due to wolves being shot during coyote hunts. A 2014 injunction on coyote hunting dramatically reduced shooting deaths, but the Service’s authorization of private landowners to capture and kill red wolves has become a primary concern in recent years.

Nearly 500,000 red wolf supporters signed a petition delivered last month to the Fish and Wildlife Service calling on the agency to continue to work to recover the dwindling red wolf population. Now, with only a reported 45 red wolves left in the wild, the Service is expected to make an announcement in the fall on whether it will continue the three-decade old red wolf recovery program.

You can find more information on the planned rally here: