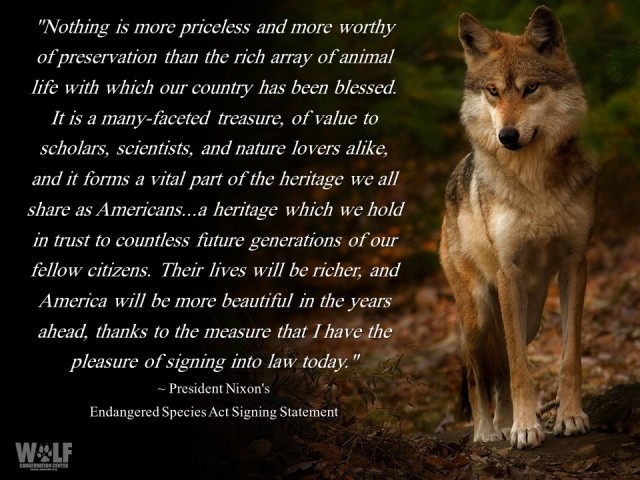 Four years ago today, the Endangered Species Act (ESA) was signed into law. Sadly, despite its success and public support, the ESA is under attack like never before.

The ESA was passed in 1973 because Americans believed that protecting our wildlife was an obligation to future generations, our nation’s environmental health, our fellow creatures, and the heart of the American way of life. It included wildlife ranges and habitats irrespective of political boundaries because these habitats, which are vital to species survival, cross arbitrary lines. Today, many politicians have forgotten the values Congress embraced four decades ago, and they now attempt to undermine one of most successful bipartisan pieces of legislation our country has ever adopted.

With extinction there is no turning back, no second chance. Thankfully, the ESA has given thousands of at-risk species like the critically endangered Mexican gray wolf (pictured) a second chance. For over four decades the ESA has worked successfully to prevent the extinction of 99% of the species placed under its protection. A national poll conducted last year found that the ESA is supported by 90% of American voters.

Despite this, some members of congress continue their attempts to chip away at the ESA bill by bill. Utah Rep. Rob Bishop, chair of the House Resources Committee, goes as far to say he’d rather “scrap the Endangered Species Act altogether.”