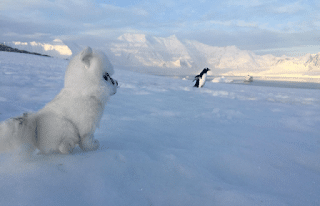 Ambassador wolf Atka first created his email account in May 2017; WCC staff figured, as a mature and responsible wolf, he should have a strong media presence to further interact with advocates around the world. And interact he did! Atka received over 1,000 emails on his 15th birthday and has welcomed a steady stream of passionate emails since. He’s Skyped with a budding scientist in Mexico, chatted with conservationists in Europe… but something was missing. After months of sorting through fan mail from six continents, WCC staff realized what Atka lacked: an email from Antarctica.

Enter Steve Schellenberg, a wildlife photographer and guide who frequently journeys to Antarctica. After meeting Atka at a WCC program, Schellenberg realized he not only wanted to round out Atka’s email collection, he wanted to bring Atka along for his journey to the land of icebergs and leopard seals. What followed was a touching note written from a tent at Damoy Point in Dorian Bay, describing chattering Gentoo Penguins and the joy Atka would surely feel at being surrounded by these flightless birds. Realizing it might be challenging for Atka to imagine the landscape and local wildlife, Schellenberg included a photo of Atka’s proxy, a mini Atka stuffed animal, reveling in the icy environment!

Thanks for showing Atka the world, Steve!

Interested in continuing Atka’s travels? Bring your stuffed Atka on vacation and email a photo to [email protected]. He’s a great companion!