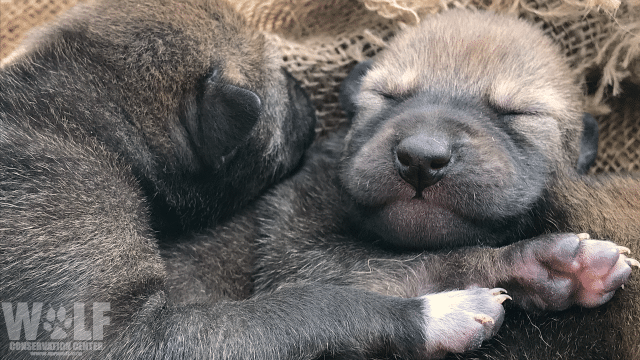 While the WCC has been a vocal and visible advocate in trying to secure protections for critically endangered wolf species, we have also naturally been quite active in physically safeguarding the representatives of the rare species that have been entrusted to our care.

Organizations participating in the SSP are tasked with basic husbandry, collaborating in the carefully managed captive breeding program, recommendations for release, and research.

This work is literally “behind the scenes” as visitors rarely get to see the wolves because they are generally kept off-exhibit to maintain their healthy aversion to humans.

This winter promises to be an exciting one as it features not only our normal husbandry but also five breeding pairs – four Mexican wolf pairs and one red!

Because the entire existing populations of Mexican wolves and red wolves are derived from such limited founding populations (just seven individuals for the Mexican wolf and 14 for the red wolf), genetic health is the primary consideration governing decisions re reproductive pairings and captive-to-wild release events. It is also the reason that the SSP programs for both wolf species pursue extraordinary conservation measures to save these species including semen collection, gamete cryopreservation, and artificial insemination (AI).

Below is a summary of the red wolf and Mexican gray wolf breeding plans:

First-time parents Charlotte and Jack will be given an opportunity to breed again this year. The pair welcomed their first litter of pups on April 19, 2018 – three boys and a girl.

Trumpet and LightHawk are also getting a chance to renew their badge of parenthood – the first-time parents welcomed their first litter, two boys and a girl, on April 30, 2018.

Mexican gray wolves Belle (F1226), Rosa (F1143), and Magdalena (F1435) could welcome pups this spring, but not with their respective mates. The three lobas will be artificially inseminated using semen preserved by cryopreservation – the use of very low temperatures to preserve structurally intact living cells and tissues. Belle and Rosa have each welcomed two litters; potential pups will be a first for Magdalena.

SEPARATION OF MALES AND FEMALES

During breeding season, we are tasked with separating each pack’s non-breeding males and females.

Wolf families usually consist of the breeding pair (parents) and their offspring of varying ages. In the wild, wolves employ behaviors and other techniques to avoid inbreeding, an innate behavior that decreases the risk of adverse mutations. For young pack members looking to breed, an option in the wild is dispersing from the pack. Options are limited for captive wolves, thus it’s necessary that all male family members be kept apart from the females until hormones subside. All of our enclosures have a dividing fence line through their interior so packs will remain in their original territories, but males on one side and females on the other. We temporarily separated males and females in the following family groups:

The seasoned parents are getting a well-deserved rest this season. After welcoming pups in the past two consecutive years, their paws are full managing their ten offspring. Because the yearlings are reaching sexual maturity, the males and females are separated for the breeding season.

The males and females within the family of eleven have been separated to prevent natural breeding between the parents. Although the nine pups born on May 8, 2018, are not yet sexually mature, the brothers have been split from their sisters, so all females are residing with Rosa, and males with their father, Alléno (M1198).

The males and females within the family of six have been separated to prevent spontaneous breeding involving those who have reached sexual maturity.

The Mexican wolf pair has been separated for the season to prevent natural breeding.

We don’t know if any of the above breeding plans will prove fruitful, but we need not wait long to find out. Breeding season has begun and the gestation period (length of pregnancy) for a wolf is only sixty-three days.